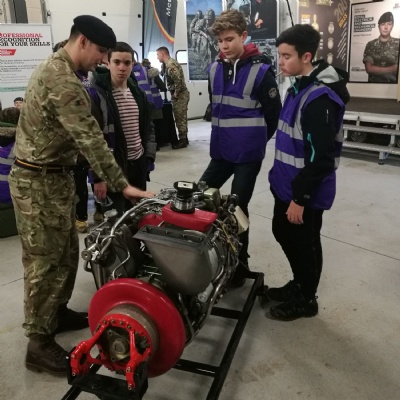 As part of our partnership with Wellington College we were fortunate enough to be able to send some of our Year 10 students to the British Army Year of Engineering launch event, a practical day designed to give students an insight into engineering and how it is used in the army.

Twenty four Year 10 students were lucky enough to attend the British Army Year of Engineering day which was held at Gibraltar Barracks.  During the day we visited a number of stalls which showed the different ways that the army uses engineering.  My friend and I went to the radios stall first which was interesting as you have to use binary to talk through them.  Next we went to the bomb recovery and disposal section and we saw a man dressed up in the armour.  He let one of the students try it on for size and he looked massive.  Then we went in the back of the lorry which carries the bomb disposal robot.  It was so tiny that you couldn’t stand up inside.  We went to the control centre and took the ‘bomb’ (bottle) using the tiny robot to drop it at the top of the hill.

After that we went inside to the robot programming where we got split into three teams.  Our team won as we got our robot closest to the end.  After a hot lunch we went to the bridge building exercise where we got to build an actual infantry foot bridge and run across it.  It was great fun and very bouncy.  Later, at the recovery stall we were able to use the winch to lift a jeep out of the mud before going to the engineering stall where we worked on an old Lynx engine.   Overall, it was a great day.